HubSpot's Inbound 2014 - What Was Missing

First, what wasn't missing from the fabulous Inbound conference? Great topics (and especially a tremendous amount of information on growing and improving your marketing agency), a fantastic facility, and great people. Meeting my channel manager and sales coach after all this time was fantastic, too. Did I mention before that I was super excited to meet my social media buddy Peg Fitzpatrick? Well, I was, and I did, and she is as wonderful in person as on social. Yay!

Aside from just enjoying her fabulous personality and wonderfully cheerful outspokenness, it was so nice to hear that she has dealt with many of the same marketing challenges I do. Isn't it nice when your heros are human? :)

For picky little things - I would have loved to see each room stocked with bottles of cold water. Running from room to room in that huge building left no time to track down water, and the water coolers that were there left you then with a precarious cup of water to try not to spill on your phone, tablet, pant leg, whatever. No big deal. Bring your own water.

What Was Really Missing at HubSpot's Inbound 2014

I came away from HubSpot exhausted but excited, but with no real "action items" or inspiration. It's true. Maybe it was me. Maybe I should have taken notes instead of Tweeting like a madwoman. Maybe I chose the wrong sessions. Whatever it was, I had trouble putting my finger on the deficit. Until I indulged myself by checking out one of the speakers I met at Inbound, Mark Schaefer of Businesses Grow.

A Rabbit Hole to Discovery, Courtesy of Mark Schaefer

I don't recall where I first encountered Mark. Somewhere on social media. He's a super-smart guy, who wrote a piece on "Content Shock" a few months back. The success of which seems to have surpised him as much as anyone else. He also took slight issue with HubSpot's lack of relationship building a while back because their bloggers never seemed to reply to blog comments. In fact, I've blogged for HubSpot many times, and I was shocked to find out that we, as writers weren't notified to new comments. I had all these comments on my posts that I'd inadvertantly ignored! I really appreciated him bringing this to my attention. Since then, HubSpot has fixed that issue.

Mark's presentation at HubSpot was a "Bold Talk" titled, "How Blogging Saved My Life." In twelve minutes, Mark shared a very personal story of trial and triumph, and I thought, "Ahhh, now I see." Everything he went through comes through in all he says and writes, and it is extremely compelling. So, you see, I had to go back and look at his blog and podcast with new eyes of understanding. 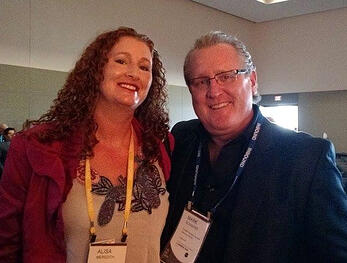 Oh, yeah, and when I went to meet him, he greeted me with a big, "Alisa, it's so nice to meet you!" and a giant bear hug. I was so touched that he knew who I was from our very few interactions on social and in his blog comments (where I assured him that THIS HubSpot blogger did care about comments and about meeting him). Yup, he's got a fan for life.

Where was I? Oh yeah, what was missing. As I said, I could not put my finger on it exactly. Then I read Mark's blog post comparing HubSpot's Inbound with Content Marketing World, which conference he also attended this year. THEN I listend to his podcast episode (#32) with Tom Webster of Edison Research, "What are the Boundaries of Inbound Marketing?" It started to come together in a big way.

It's Time for Inbound to Grow Up

A couple of years ago, social media was all about unicorns and rainbows. "What's the ROI of your mother?" being the standard response to the question, "But, what IS the ROI of social media?" People touted themselves as social media "experts," with impunity, knowing that the only thing they needed to aim for was something called "engagement," which their customers didn't understand anyway.

Today, it feels a little like inbound marketing has become the unicorns and rainbows solution for everything that ails a business. Not that it doesn't work - I'm not saying that. It DOES. However, those who strongly believe in inbound - myself included, need to take a good, honest look at it and the challenges we are facing.

Tom's article on Jay Baer's Convince and Convert website brought up an excellent point. HubSpot, at eight years old, is still losing money.  A lot of money. From a company that touts the cost-effectiveness of inbound marketing, this is surprising. And why are they losing money? It's their sales and marketing budget. It's huge. So, how is it that they expect us to make a success of our businesses with inbound when they aren't?

This is Not a HubSpot Bash - It's a Question

I have definitely been drinking the HubSpot Kool-Aid, and I intend to continue to do so. Their product is second-to-none, improves all the time, and I have NEVER experienced the level of support as a partner or a client as I have with HubSpot.

But, I would like to know, what exactly ARE they spending their money on? And at what point will they start making money? During their IPO process, they are apparently not able to comment, which is understandable, but since they are THE poster child for inbound, our inbound heroes, it will be good when we can get an explanation. Is it the cold calls? The webinars? The conference?

My guess is, they are spending crazy amounts of money on sales and marketing now in order to grow incredibly fast (and it is working) to capitalize on the inbound craze and be well-established for the future. Still, is the estimated eleven THOUSAND dollars for each new customer sustainable? It will be interesting to see what shareholders change after the IPO.

What We Need to See at HubSpot's Inbound 2015

It's time to go beyond convincing people of the need for inbound marketing. Most people have figured it out. Those who don't can find plenty of resources online. It's time to recognize the challenges of those who are already implementing inbound and support them in that - even if it means going outside what we consider to be stritcly "inbound."

Outbound still works. Outbound combined with Inbound can work incredibly well. Let's acknowledge that and support marketers in making the most of both. It should also be acknowledged that some companies hire multiple agencies - one for paid ads and outbound and one for inbound. How can we more effectively work together, and more importantly, should we work to become all things to all people?

We all learned this year that Facebook isn't going to work unless you are ready to pay. Let's learn how to do that well. Social needs to be a big part of inbound, even when it is paid. A nice deep dive with some actionable "how-tos" would be nice here.

There was a session on content for boring industries. We need more. We need to talk about how to stand out in a crowded content world (thanks, Mark). What if there are already more blog posts, videos, infographics and ebooks in your industry than you could ever read?  Can inbound still work for you?

What about local? Can HubSpot work for local businesses? How?

One of the Biggest Challenges? Clients.

Something I think we all noticed is how many times we heard people ask, "What do we do when a client (insert bad behavior here)?" Inbound involves delighting clients. How can we better do that when it is so difficult for us to gain trust and maintain open communication despite our best efforts? I think we could all use some support in that area - for the good of our clients and the results we could be bringing if things worked more smoothly.

OK, OK, I know. I am a little bit of a broken record on this topic. There were some good parts about visual marketing, including Guy Kawasaki and Peg Fitzpatrick on the "Perfect Post." Still, I feel that HubSpot hasn't fully realized the potential of Pinterest as a traffic and lead generation source. If you need a speaker for next year, I'm officially volunteering to talk about my client who now gets 46% of his considerable website traffic and 54% of his leads from Pinterest. Want more? Watch my hangout with Jeff Sieh on The Manly Pinterest Show.

Looking at the agenda again, it looks like I could have found bits and snatches of what I missed at other sessions (so hard to decide!). What might be nice is a new level. They have Beginner and Advanced, and a partner track. How about one specifically for Inbound Challenges for the established agency who is past the honeymoon stage, but all of whose members are not necessarily interested in the "build your agency" topics?

Were you at Inbound? What were your favorite parts, and was there anything missing for you? What do you hope to see next year?