Campaigns Made Easy: A Must Have Inbound Marketing Tool

We recently decided on a new strategy at OverGo where we focus on one piece of content a week and promote it as much as possible. We wanted to test out which of our offers really catch our audience’s attention and which ones fall short in the “Hey! Look at me!” department. So we planned out about 2 months’ worth of campaigns and how to market them every week.

Why We Did It

How We Did It

After doing this, we started on our first campaign which was a Case Study. We went into our handy dandy campaign document and checked off every avenue we thought would benefit this campaign, both paid and unpaid. We thought about the title of the offer, what the takeaway from it was, and who would appreciate it most. Sure a business owner might love to read a Case Study they spotted on LinkedIn but maybe not be so into it if they spotted it on Twitter.

Now, we use HubSpot’s campaign tool. If you don’t have HubSpot you can still plan this out the same way, you’ll just have to pull the information yourself rather than have it automatically put in one spot like HubSpot does. So we went ventured into their campaign tool and started to set up that week’s campaign.

This was our first campaign so we set our goals pretty standard. For a week we thought this was easily reachable based off of the type of promotions we were running.

Then We Kept Tabs

Within this campaign tool there is a dashboard. And on the dashboard you can see in one glance everything the tool tracks. Landing pages, calls to action, emails, blog posts, social messages, keywords, pay per click ads, other sources, and workflows. So throughout the week when I was composing a tweet about our content I would choose the campaign and we could track who came to the site from that one tweet. Pretty cool right?

This is what our dashboard looked like at the end of the week. 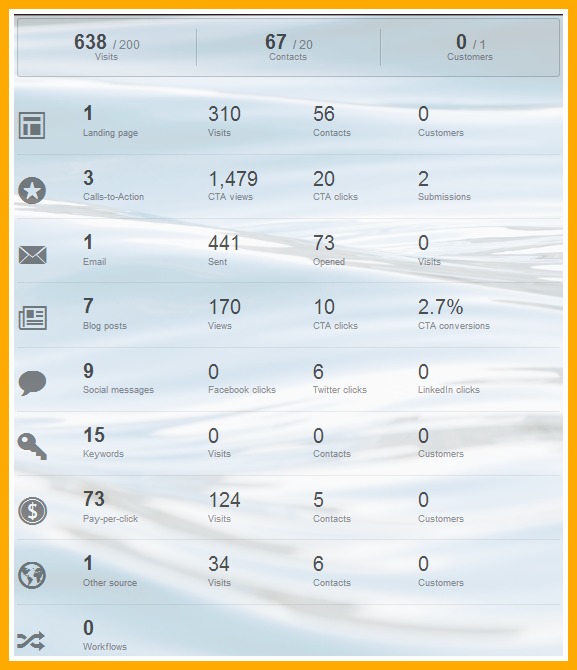 As you can see, we kind of underestimated our goals. We also didn’t start tracking social messages until well into the week. But regardless everything we wanted to know is right here. You can dig into each category and see exactly where everyone is coming from.

For each campaign we look at where our traffic and leads are coming from and if it was worth spending the money there. If there was a lot of traffic coming in from LinkedIn but nobody converted then we need to rethink how we targeted that advertisement. Within the campaign tool there is a notes section where we keep tabs of what works, what doesn’t work, and suggestions for what to change next time.

The benefit of creating an entire campaign, choosing avenues, setting goals, tracking, and analyzing is all about ROI. By doing this we see how much it costs to convert traffic to leads and leads to customers. We see what efforts are bringing in what kind of leads because we know, all leads should not be treated equally!